When chefs train, most of them are trained in French-style cuisine. And there’s a good reason for this. A good grounding in French cuisine gives chefs a good basis from which they can improvise and experiment.

It comes as no surprise, then, that Paris – the capital of France – needs to have some of the best food markets out. Here is our pick of the top food markets in Paris for your next visit.

We start off our tour of French food markets at the Rue de Levis in the 17th arrondissement. First up, we must warn you that some of the districts of Paris have no distinguishing features, so it’s very easy to get lost among the streets and streets of apartment blocks. Remember also that Parisian arrondissements (which is translated as ‘districts’) are organised in a spiral, so it’s incredibly possible to walk around in circles!

When trying to find this gem of a market street, we did just this. However, once we hit on the right turn, it was like a TV or radio had been switched on! People were bustling around the open-air carts looking for the best products that they could take home.  These are Parisians doing their shopping – not the tourists you’ll find on the Rue de Rivoli picking up curios.

Another thing that is interesting about this market is that the stallholders have set up their carts in front of other brick-and-mortar shops on the street however they don’t detract from the other shop’s custom – in fact, they almost help each other out!

You have a choice of metro stops to get to Rue de Levis – either Monceau, Malesherbes or Rome will get you within easy walking distance. 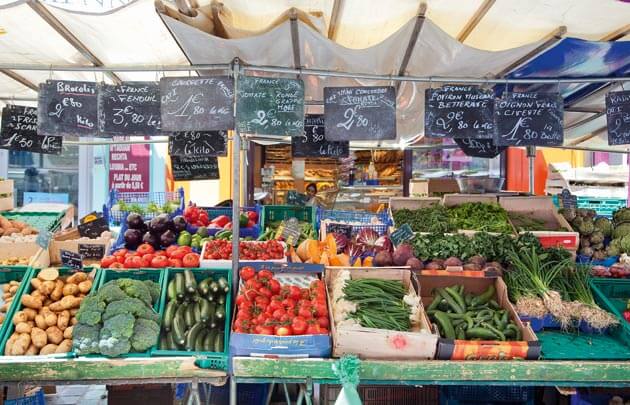 Next on our food market tour of Paris is Marché d’Aligre in the 12th arrondissement which is home to the Gare de Lyon and the Opera de la Bastille. It is a melting pot of international cuisines and you’ll find many locals shopping for fresh produce here as this market is known for its great deals.

Another one which locals frequent is Marché Saxe-Breteuil in the 7th arrondissement. Although it calls famous monuments – such as the Rodin museum, the Invalides and the Eiffel Tower home – this arrondissement is largely residential.  To get here, the best metro stop is Ségur and it is open from Tuesday right through to Saturday.

If you’re in the mood to do your shopping with a breath-taking view of the Eiffel Tower, then gaming starts here. You need to visit the Marché President Wilson, located in the 16th arrondissement. The market is beautifully presented and boasts a lot of variety, with local produce mixed in with Lebanese delights as well as other non-food items such as scarves and leather goods. Definitely a one-stop market!

If you’re wanting to visit Marché President Wilson, it’s open on Wednesday and Saturday from 7 am to 2.30 pm. If you’re looking for the nearest metro stop, it’s Iéna.