Humans have believed in ghosts for as long as there’s been recorded history; for many, it proves that there’s an afterlife; and for others, ghosts are simply terrifying beings that they want nothing to do with.

Hotels have long been a favourite spot for ghost-hunters, and apart from castles, hotels tend to be some of the most haunted sports in the world.

For those travellers looking to one day come face-to-face with a wandering spirit, these are the hotels where it’s most likely to take place. 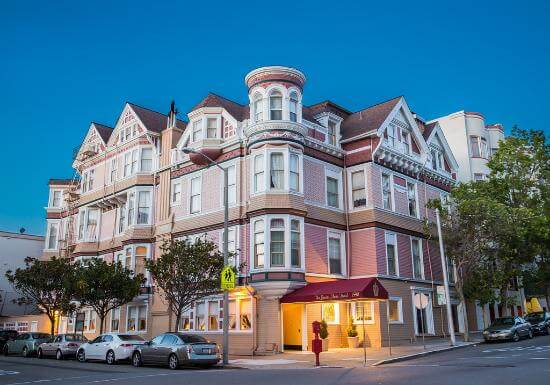 Located in the city of San Francisco, the Queen Anne Hotel originally started out as Miss Mary Lake’s School For Girls.

Today, it can be found in the city’s Pacific Heights district, and it’s believed that the headmistress of the original school haunts the hotel to this day after the hotel was sold without her consent.

Room 410 is allegedly where the headmistress is most likely to be found, although most of her actions are peaceful, such as tucking guests in or fluffing up their pillows.

Florence is among the oldest cities in the country of Italy, so it makes sense that it would be home to a lot of ghosts and ghouls. One establishment that’s particularly famous for its ghostly inhabitants if the Hotel Burchianti, which was once a favourite venue for none other than Benito Mussolini.

Reports from those staying in the hotel include a phantom woman that knits in the lobby, as well as a maid that wakes up early in the morning to start cleaning.

The Fresco Room is apparently where most of the ghostly action takes place, where many have stated that a malevolent spirit makes itself known to anyone staying the night.

A truly palatial hotel that can be found in the old town of the city of Quebec, Canada, this establishment is well known for a few reasons.

Not only is it declared a UNESCO World Heritage Site with plenty of fascinating history, but it was also the home of Louis de Baude de Frontenac, who was a governor that lived in the 17th century, dying in 1698.

There are countless reports from guests that the governor still walks the halls of the hotel that was once his home.

The Shining is one of the most popular books ever written, and centres around a haunted hotel and its ghostly denizens. Author Stephen King found inspiration for the book after visiting the Stanley Hotel, which can be found in Denver.

Guests have reported many haunted encounters of the years, including face-to-face incidents with spirits, as well as a young pair of girls that can be found on the fourth floor.

Today, it’s a favourite for ghost-hunters from around the world hoping to make money online, who often spend entire nights going around the hotel trying to find evidence of the many alleged spooks that roam the halls and rooms.