Some head off on holiday for beautiful scenery, relaxing days on the beach, and perhaps a bit of foreign cuisine indulging. Others, however, aren’t happy with a holiday unless their heart is racing, and eyes bulging from excitement. Yes, thrill seeking is becoming increasingly popular, and we’re on board with that.

It sounds like some sort of joke, but certainly isn’t. A Swiss based company named MiGFlug offers a service to the public which involves allowing them fly in a genuine fighter jet. Of course, the tourist won’t actually be in control of the jet but will be aboard one as it repeatedly breaks the sound barrier. So now the truly adventurous can experience what it’s like to pass out in a MiG-29, Hawker Hunter, or Albatross.

The company only operates in the UK, USA, and a handful of European countries, though.

Again, not a joke. A company called Bigfoot Nicaragua offers tourists the chance to board down the side of an active volcano. Yes, the volcano did just erupt recently. In 1999, as a matter of fact. Plus, if you’re really into risking your life, the boarding sessions can have you hitting speeds of 80 kilometres an hour.

This one may not be for everyone, since it really is up there as far as risk goes. Though, it is possible to simply have a hike up the volcano, rather than having a limb risking boarding session. 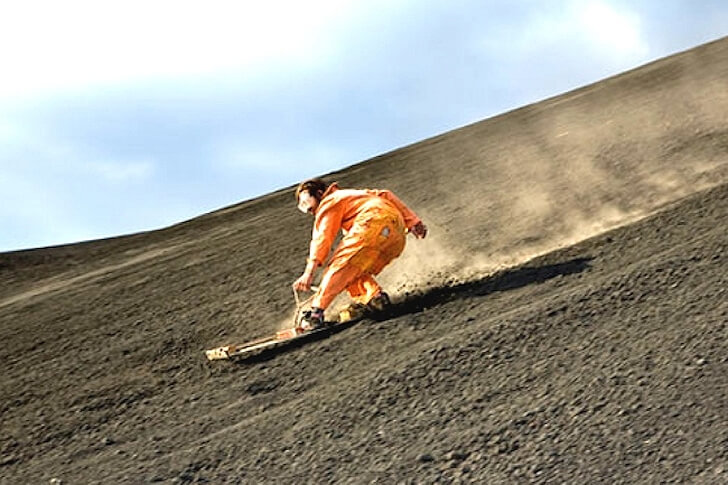 The Cage Of Death

You can really take your choice between cage diving with sharks, or crocodiles. Shark cage diving is offered near Cape Town, South Africa, while the so called Cage of Death is operated in Australia. The Cage of Death involves being in water, face to face with killer crocodiles, and only having a few inches of glass protecting you from a mauling.

We’d recommend heading back to a comfy hotel room after the brush with mortality, and maybe surfing your phone for the top games to enjoy online, perhaps with a stiff drink.

Seeing photos of the Cliff Walk near the South Peak of Mount Hua, China, is enough to make you faint. Imagine doing it in person. It really does take a pretty strong desire for thrills to try this one, and we respect anyone who has the sheer guts.

The Cliff Walk is more than two kilometres off the ground and demands that the brave risk death every step of the way. A one point only a thing wooden plank is provided, requiring the brave to cling to the side of the mountain to avoid plummeting to their doom. Yikes.

Similar to the Cliff Walk, the CN Tower Edge walk has been made available for the brave. It is a journey that lasts 90 minutes and will have brave participants dangling around 356 meters off the ground. Interestingly enough, the ride up the tower in the glass elevator was referred to as thrilling before this became possible.